I’m sure you’ve seen the guys and gals on TV that is outdriving you by about 80 yards. You might be wondering how you stack up to the rest of us average folk, and in this post, I’m going to be showing you how far the majority of golfers hit their driver at each age.

The average driving distance across all ages of golfers is 219 yards. Golfers under the age of 30 typically hit the ball the longest (238 yards) and distance declines by around 10 yards every ten years. Swing speeds normally decrease as you age and that’s where the decrease in yardage comes from.

All of this info was based on data that was collected by shot tracking companies such as Trackman and Game Golf. Obviously, it’ll all depend on the golfer and you’ll still have people in their 50’s crushing the ball over 250. These numbers are just averages across the board. Continue reading and find out a few ways to increase your driver distance.

Averages Based On Handicap

We just talked about the average driver distance based on age but we can narrow it down even further based on handicap. If you don’t know, a handicap is referring to your average score for 18 holes. A scratch golfer will shoot around par on average while a 10 handicap golfer will shoot 82 (or a little worse) on a par 72 golf course.

The average driving distance for a golfer with a 5 handicap or less is 250 yards. You might think that’s kind of low for a good golfer but it’s pretty realistic for someone who isn’t a professional. If you hit the ball the average distance you’re really not that far away from the average distance of a scratch golfer.

The average driving distance for a golfer with a handicap between 5 and 10 is 231 yards. That’s getting even closer to the average distance for all golfers and might make you feel a little bit better. These golfers are still quite good.

The average driving distance for a golfer with a handicap between 10 and 19 is 215 yards. This is actually less than the average distance for all ages but is still long enough to be able to put up some decent scores.

The average driving distance for a golfer with a handicap between 19 and 28 is 195 yards. This is getting a little bit down there and a lot of the reason is that you probably have a lot of curve to your shots.

The average driving distance for a golfer with a handicap above 28 is 177 yards. You definitely have some work ahead of you if you’re in this boat but the good thing is that you’re probably a beginner. 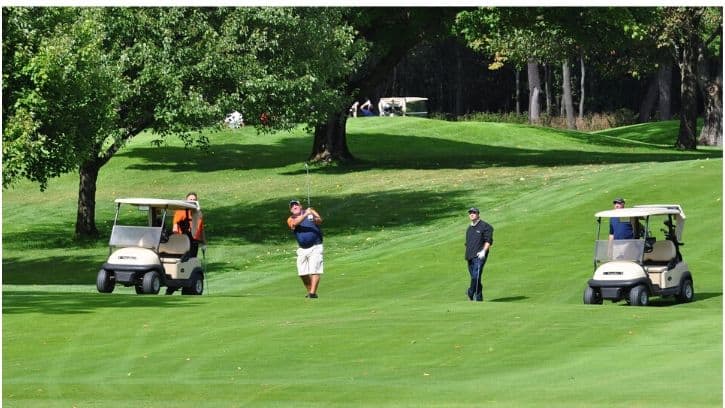 One thing I wanted to mention is that you can put up some decent scores if you only hit the average distance of 220 yards. Obviously, hitting bombs will help you out but if you’re not hitting the fairway it doesn’t really matter.

Focus on hitting more fairways and you’ll give yourself more putts for par.

I’m sure you’ve seen the old guy who steps up to the tee, only hits the ball a little over 200 yards, but it’s dead straight. More often than not, he’ll actually finish with a pretty decent score.

How To Improve Your Distance

Everyone wants to add distance to their shots and I think that’s something you should focus on when you can consistently hit the fairway. For a while there I actually benched my driver and woods and would hit my hybrid off the tee.

It only went about 210 yards but it was in the fairway almost every time. As a result, my scores actually did get better. That just shows you the power of keeping your ball in play.

Once you have that dialed in, you can start focusing on distance. There are a number of things you can do to work on your distance (we’ll talk about some simple options) but it all starts with practicing the right way at the range.

The first thing you can do to add distance to your shots is by keeping them straighter. I know it’s easier said than done but you’d be surprised by how much more distance you get when your shot doesn’t have any curve.

One thing you can easily do is check where you’re making contact with the ball. Spray some foot spray on the face of your driver or put some green tape on. Take a swing and you’ll see right away where you made contact.

I can almost guarantee that you’re not hitting the face square and that’s causing your shots to curve. Really focus on making contact in the center of the driver and you should get straighter shots and a lot more distance.

The second thing I did was focus on keeping my lead arm straight and my right elbow tucked in on and backswing and the first part of the downswing. Having an elbow that flares out will probably cause you to come over the top and slice the ball.

The last thing I did was start using the right ball for my swing. The majority of people just use whatever ball they can find and some people use what they see on TV. Both of those are hurting your game.

All balls are different and some are made specifically for people with slower swing speeds. One type of ball will suit a scratch golfer but it’s not going to work for the average player.

If you’re a scratch player then you probably want to use a ball that has a good amount of spin. This will let you control the shape of the shot and the trajectory.

If you’re a 10 handicap or worse then you’ll probably want to use a lower compression and lower spinning golf ball. This will help keep your shots straighter and will most likely give you more distance. Check out our golf ball info chart to see which balls have a low spin and what balls have high spin.

Having a club that you feel 100% confident in for hitting the fairway is a must-have for a mid handicapper. For me, that's my fairway wood, and in this post, we'll be talking about some of my...