If you’re just an average weekend golfer then I’m sure you’re looking for anything that’ll improve your game. There are so many different gimmicks out there but the majority of them don’t work one bit. One thing that can make a difference is playing the right golf ball, and in this post, I’ll be comparing the Titleist Velocity to the Callaway ERC Soft.

Both of these golf balls are designed for the average hacker because they’re supposed to be more forgiving, higher launching, and longer off the tee. Most people use the same balls as the pros and they wonder why they get no distance or can’t hit the fairway. You aren’t a pro so you shouldn’t play the same ball.

What I did was I took both of these balls to the course and actually tested them out. I played a par 3, par 4, and par 5 to see which ball came out on top. I’ll be talking about what ball would be ideal for the average person in terms of distance, accuracy, launch height, and overall feel. Watch the video or check out the full comparison below. 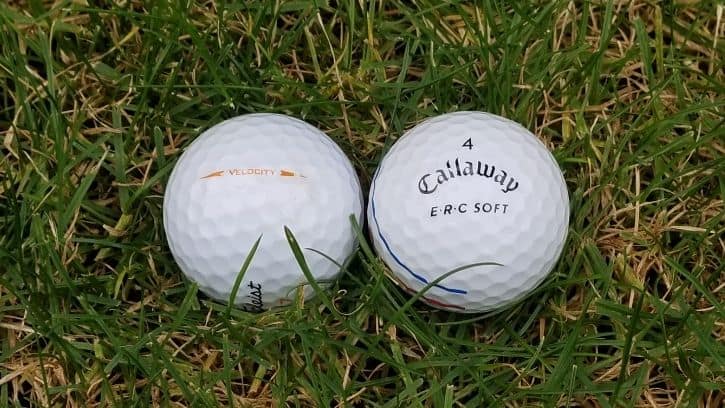 When it comes to these two balls, the ERC Soft is definitely the softer ball (hence the name). Some people love a softer golf ball while others feel like they’re hitting a sponge. The choice is really a personal preference but both balls felt good to me.

I do like a softer ball myself and I thought the ERC Soft felt awesome on the green. As soon as I made contact I could tell how solid it felt and it gave me the sense of having a lot of control. This isn’t something that’ll impact your scores but it’s nice having something that feels solid.

I’m not saying the Velocity felt worse on the green but the ERC was noticeably softer. On the tee and from the fairway, the Velocity felt like it exploded off the face. Again, it wasn’t any better or worse than the ERC and it really comes down to what you personally like.

This is the main thing that matters in the eyes of an average player because nobody likes being 20 yards behind the rest of the group. In my experience, the Velocity was a bit longer than the ERC and I think the main reason was that the ball flight was straighter.

On the first hole, it was pretty clear that the Velocity was straighter and ended up in the middle of the fairway. The ERC barely bounced into the rough but was at least 10 yards behind the Velocity. If both balls were to go perfectly straight then I’d imagine them having the same distance but the wasn’t the case for me on the first hole.

The exact same thing happened with the second shot. The Velocity flew a bit straighter and had a bit more distance to it. The Velocity was able to clear the bunker while the ERC ended up in the middle.

On the second hole, both balls had pretty much the same ball flight. I ended up hitting the Velocity a little fat and it ended up a bit short. The ERC ended up on the green and I think the Velocity would have been in the same spot if I hit it pure.

On the third hole, both balls ended up going the same distance. They pretty much had the same ball flight but I did hit the Velocity a bit more left than I wanted and it bounced off a hill. I think it would have gone a bit farther if it took the same line as the ERC. All in all, both were pretty respectable.

This is probably the main thing I look for in a ball because you could have all the distance in the world but if you’re always hitting from the rough it’ll be hard to put up good scores. What I mean by accuracy is what ball hit more greens and fairways. For me, I’d have to give the edge to the Velocity because it was straighter.

On the first hole, the Velocity ended up in the center of the fairway while the ERC just bounced into the rough. Both balls missed the green on the next shot, but again, the Velocity went a bit straighter.

On the second hole, both balls had a very similar line. The ERC ended up on the green while the Velocity was a bit short because I hit it a little fat. If I hit it pure then it would have been in the same spot.

On the last hole, both balls ended up in the fairway so I was pleased to see that. They did end up missing the green but that’s because I used the wrong club and was short. One thing I did notice was that the ERC Soft was never the only ball to hit the fairway.

For the average golfer, if you want to get more distance then you should probably add some height to your shots. A lot of people hit the ball really low and that’ll make it tough to get any sort of distance (unless you have a really fast swing).

On the three holes I played, the height of both balls was pretty similar. If anything, the ERC Soft was slightly higher but it wasn’t enough to make a noticeable difference. Both balls are designed for high launches and both of them seemed to do their jobs.

For stopping power, what I’m talking about is how much (if any) spin the balls have on the green. I’m sure you’ve seen the pros on tv where they hit the ball 20 yards past the hole and then it spins back to within a few feet. That’s spin.

Obviously, the average player isn’t going to be able to do that (me either) but it’s always nice for your ball to have a little bit of bite. There’s not much worse than when you hit a good shot, it lands pin high, and then it rolls right off the green into the rough.

Both of these balls aren’t going to spin as much as a ProV1 but they did a pretty good job compared to some of the other balls on the market. That was really nice to see.

On the second hole, the ERC Soft actually landed on the green and rolled back a few feet. The green was a bit wet so that obviously helped, but a lot of balls wouldn’t have done that.

What Ball For The Average Golfer?

Taking into account everything we talked about, I’d probably recommend Titleist Velocity to the majority of golfers. I’d definitely play it myself and I think it’s one of the best overall balls for the average player. The reason I like it is because of the solid feel off the tee, the straight shots, and the distance that came with that.

Pretty much everything was solid about it and I think it could be a ball you’d still play as you start getting better. Oh, and the price is also much better than some of the other balls on the market. Check the price on Amazon.

That being said, I probably wouldn’t recommend Velocity to every single average player. If you’re someone who has a really slow swing speed then you might be better off with the ERC Soft. The compression on it’s a bit lower and you might be able to squeeze out a bit more distance. Check the price on Amazon.

If you're someone who normally shoots in the 80s you're considered a mid handicap golfer. There are a number of things a mid handicap player should be looking for in a golf ball, and in this post,...

Picking the right golf ball for your game is a pretty important thing to do and most people are actually using the wrong ones. In this post, I'll be talking about the 7 best golf balls for average...