Looking for some fun golf games to play on the course? Whether you want to dish out some cash, drink a few beverages, or just have some fun, here is my full list of all the golf matches available for singles, doubles, and larger groups of players.

Here are some great golf course games that can be played by yourself. Some of them could be played with more than 1 person as well.

This is the most common golf course game that a single golfer would play. All you have to do is hit 2 or 3 balls each hole and only count the best score. You often hit the second ball much better and it really helps you improve your game.

If you want a slightly more challenging version of Best Ball you can flip it around and play Worst Ball. It’s very similar but all you have to do is hit 2 or 3 balls each hole and count the worst score. See if you can still get your normal score.

This is a little bit of a more advanced golf game (but it is actually really fun). All you have to do is play holes 1 & 2 with a draw for each shot. Then, play hole 3 & 4 with a fade for each shot. Hard, yes (but challenging). 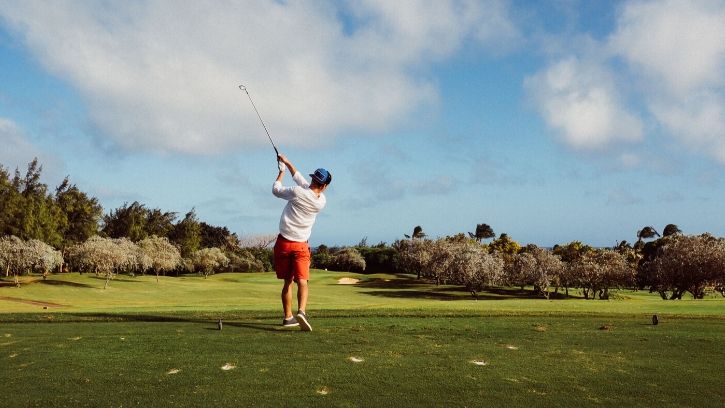 Here are all of the 2 player golf matches I could find. Some of them can be played with more than 2 people as well.

This is the classic game of golf. You count the number of strokes it takes to finish a hole and the person with the lowest score wins.

This can be done in groups of 2, 3, or 4. Instead of playing the lowest overall score wins, instead, you get a point for each hole you win. If you win a hole you get 1 point. If the hole is tied you carry that point to the next hole (which is worth 2 points and so on). The player with the most skins (points won) by the end of the round is the winner.

This can be done in groups of 2 or more. This is similar to stroke play but instead of having a score based on the Par of the course, you earn points for the score you get. You get 1 point for a bogey, 2 points for a par, 3 points for a birdie, 4 points for an eagle, and 5 points for the all mighty hole-in-one.

This can be done in groups of 2, 3, or 4. This is a pretty interesting one and you’ll need to bring scissors and string. You’ll need to first figure out everyone’s handicap. Next, if someone is a 10 handicap you’ll give them 10 feet of string. You can then move your ball and cut that much of string off (for getting out of hazards and bad lies). You can even get a foot of string back with every birdie.

This can be done in groups of 2 or more. This is somewhat similar to Stableford but slightly different. If you get a double bogey or worse you get -3 points. If you get a bogey it’s -1 point. You get zero points for a par. You get +2 points for a birdie, +5 points for an eagle, and +8 points for a hole-in-one. The player with the highest score wins.

This can be done in groups of 2, 3, or 4. This is kind of similar to playing with mulligans. Before the round, you set how many mulligans you want to get per round. If you don’t like where your ball ended up you can kick it to a new spot and take your mulligan. 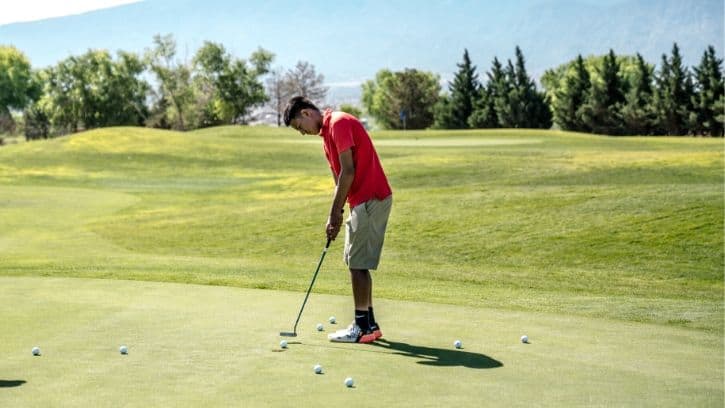 Some of these golf games can be played with more than 3 people.

This is somewhat similar to Skins. The player with the lowest score on a hole becomes the Chairman. If they win the next hole again they are still the Chairman. If 2 players tie for the best score, the current Chairman remains the same. The person who is the Chairman for the most holes wins.

This is a game with 3 real players and 1 imaginary player. One person will be paired with the Ghost and the other 2 will become a team. The Ghost will par every hole (best to put the Ghost with the worst player). The team with the best score at the end wins.

The first thing you’ll need to do is set a bet. Whenever someone 3-putts a hole they become the Snake. If someone else 3-putts they become the new Snake. The person who is the Snake at the end of the round has to pay the set bet.

Once everyone has landed on the green the player closest to the pin gets 3 points, the second closest gets 2 points, the next closest gets 1 point, and the furthest person away gets zero points. The player with the most points by the end wins. 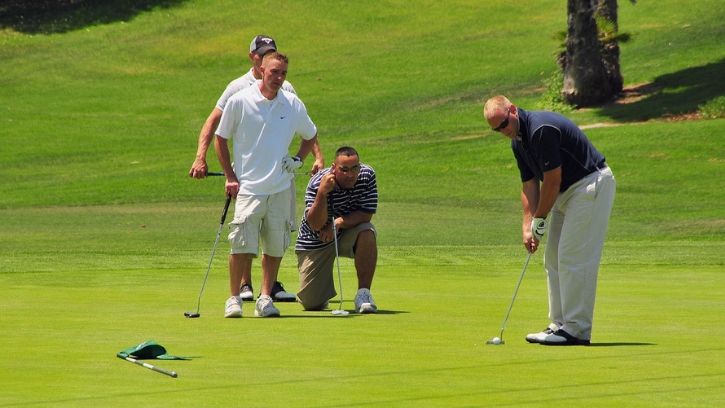 Get into groups of two. 1 player will tee-off on even holes and the other on odd holes. After the tee shot, the players will alternate shots until the hole is done. The team with the best score at the end wins.

This game is similar to foursomes. The difference is that each player will have a tee shot, you’ll then pick the best ball and alternate shots after that. The team with the lowest score at the end wins.

This is very similar to Greensomes. However, after the tee shot, your opponent will pick which ball you have to play.

Similar to Greensomes. After both players have had their tee shots, you’ll decide which spot is better and you’ll each take your second shot from that spot. Finish the hole and count the best score.

Same as Greensomes but you and your partner decide which ball to play after your second shot. Alternate shots after that.

You and your partner will alternate shots. If partner A sinks the putt that means partner B will tee-off on the next hole.

Each player will play their own ball and you’ll count the best score for each hole.

Each player will play their own ball and you’ll count the combined score of each hole.

Each player will play their own ball. The player with the lowest score will get a point. Another point will also be given to the best of the highest score. The team with the most points at the end will win.

This is a game where you’re in groups of two and your scores are going to get combined. If you get a 4 and your partner gets a 6 you’ll combine those and your score will be 46 (lowest number first). Before the round, you’ll set a bet for how much you’ll pay for each point difference (let’s say $1 per point). If your group gets a 46 and the other group gets a 56, they’ll owe you $10.

This is a game where you’ll assign a 3-putt a certain value (let’s say $2). If someone 3-putts a hole each person will put $2 into the pot. Anytime a player 1-putts they’ll be given a playing card. At the end of the round, the player with the best poker hand will win the pot (the player with the most 1-putts will have the best odds).

In this game, you’ll change partners every six holes. Every 6 holes will be a new bet. You can play any style of game (stroke, skins, etc).

Before the round starts the group will need to determine how many “meetoo’s” each player will have during the round. If you find yourself in a bad spot you can move your ball to where someone else is and hit your next shot from there. You and the other play will both shoot from the same spot. This can be done on any shot on the course. 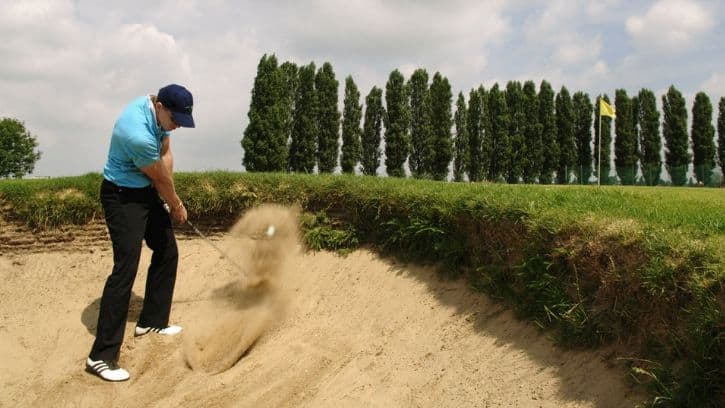 Drinking Golf Games To Play On The Course

This game is for all the par 3 holes. The player who lands closest to the hole doesn’t have to drink. The rest of the players do. If you miss the green completely it’ll cost you extra drinks.

Someone gets a birdie. Guess what? Everyone else drinks.

If you find the drink you might as well take a drink.

The number of beers you drink through the round is the number of strokes you can take off your score.

Having a club that you feel 100% confident in for hitting the fairway is a must-have for a mid handicapper. For me, that's my fairway wood, and in this post, we'll be talking about some of my...