If you’re someone who struggles with distance control or constantly find yourself in a hazard, you’ll want to get yourself a GPS. In this post, I’m going to be reviewing the Garmin Approach S40 golf watch and talking about how it performed on the course compared to other units.

The Garmin Approach S40 does have most of the bells and whistles you’d want on the course, is built really well, and is just as accurate as any. It’s quite a bit more advanced compared to the Garmin S20 and is also a bit more rugged.

It’s not the cheapest watch on the market so that’s why you’ll only want to consider it if you’ll use it often. The Garmin S40 (Amazon link or Global Golf link) is one of my favorite golf watches and is just behind the Garmin S60 in terms of features. I think it’ll do pretty much everything you’d need on the course. You can also see our favorite golf GPS units here.

The S40 is a golf watch from Garmin and it was made to sit in between the Garmin S60 and Garmin S20. It doesn’t have quite as many features as the S60 but it is quite a bit more advanced than the S20.

One of the big differences between the S20 and S40 is that this watch has additional tracking features outside of golf. It has a bunch of clock features (stopwatch, alarm, etc) and it also has some health features (hydration, sleep, etc). It also has a bunch of stuff for running or cycling. I don’t care about that stuff but you might.

The first feature is that it comes loaded with over 42,000 courses from around the world. Garmin has the largest selection of courses and pretty much all the main courses in my area were on it. Some of the smaller courses weren’t but the rest were. You can always check the Garmin website to see what courses are included. They always add more as well.

Next, you’ll be able to see the distance to the front, middle, and back of the green. I don’t know about you but I always seemed to end up long or short of the green. With a GPS, that doesn’t happen as often.

It’s also going to tell you the distance to doglegs and layup spots. If you don’t hit the right distance into a dogleg then you’ll probably have a really tough or blind shot into the green. Not ideal. It’ll also tell you how far you are from the 100 and 150-yard mark. These are two distances you should get dialed in.

One of the most useful features is that it’ll tell you how far you hit the ball. Knowing how far you hit each club is incredibly important if you want to get more consistent. This is one of the few ways to find out that info.

What the S20 doesn’t have is the ability to get distances to custom targets. The S40 will let you select any point on the course and it’ll save the distance for future reference. Unfortunately, this has to be done manually and you can’t get the distance to any spot (like the S60).

Another advanced feature is stat tracking. After you play your round you’ll be able to see how you actually played and where you need to improve. It’ll show you putts per round, greens in regulation, and fairways hit.

The Autoshot feature will record your club distance so you can get an average on how far you hit each of your clubs. This will help you figure out what club to hit from different distances.

You’ll also be able to see the green shape and move the pin around to get a precise distance. You aren’t able to do that with the S20. Sometimes the pin isn’t in the middle of the green and that’s when this feature is useful. 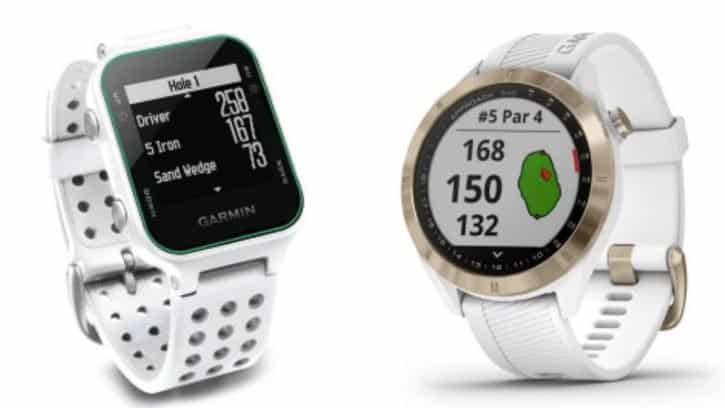 What we look at with the design of a watch is how comfortable it was to wear and how user-friendly it was to use. Both are super important, especially if you don’t really like wearing watches, like myself.

Even though I’m not the biggest fan of watches, the S40 was actually quite a bit more comfortable than most of its competitors. It was a little bit on the bulkier side but it was a lot better than the S20. If you wear watches often, it probably won’t be a big deal.

It’s a big difference going from the cheaper watches to the S40 in terms of comfort and it’s nice because you can get a few different materials. It comes with switchable straps so you can pick between colors and material. This is a feature most golf watches don’t have.

It’s somewhat similar to the Forerunner 645 and it has a 1.2-inch color touchscreen display. The screen seemed to be quite durable and shouldn’t break or scratch as easily as some of the other units.

That being said, the interface of the watch was a little complicated at first (and I’ve used quite a few). There are a lot of different features so it does take some time to fully understand them. Something like the S20 only has a few features so it’s really simple to use but you should get it within an hour or so of playing around with it.

How Did The S40 Perform? 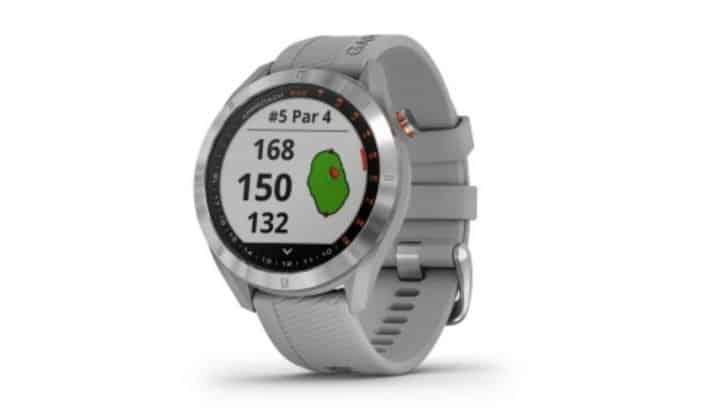 What we look at most when it comes to the performance is how long the battery lasted and how accurate the watch was for greens and hazards. This is the main thing that really matters in a golf GPS.

As far as the battery goes, it lasted just under 3 full rounds for us (3 rounds if we finished quickly). That was actually near the top of the list and most other watches were around 2 rounds.

The accuracy from where you were to the green and hazards was really good (just like most Garmin GPS units) and it always seemed to be within 4-5 yards of the course markers. That’s pretty standard across Garmin watches.

A. The Garmin S10 doesn’t have quick-release bands, it isn’t a touchscreen, and has less resolution/screen size.

A. The Garmin S60 doesn’t have quick-release bands but it can control your phone’s music and has more golf features like PlaysLike, Pinpointer, and Touch Targeting.

A. No, the S40 does not come with a heart rate monitor.

Q. Is the Garmin s40 waterproof?

It doesn’t have every golfing feature like the Garmin S60 but it is around $130 cheaper. Compared to the Garmin S20, it’s well worth the upgrade if you’ll end up using it a lot. Either way, all three are awesome golf watches and I don’t think you could go wrong with either of them.

One of my favorite multisport watches was always the Vivoactive 3, so I did have some high expectations when the newer model came out. In this post, I'm going to be reviewing the Garmin Vivoactive 4...

Today we're reviewing the Garmin Approach X40 Golf GPS and I'll be sharing my honest thoughts after testing it out. Garmin is one of the top GPS companies out there right now and the X40...

Welcome to Out Of Bounds Golf. We aren't professional golfers but are huge golf fans and this site was created to test out different golf products and find the best gear, tips, and tricks for the average golfer.

Outofboundsgolf.com is a participant in the Amazon Services LLC Associates Program. As an Amazon Associate, we earn from qualifying purchases. This site also participates in other affiliate programs and is compensated for referring traffic and business to these companies.