Having some sort of rangefinder on the course is one of the easier ways to really dial in your distance control and lower your scores. In this post, I’m going to be reviewing the Garmin Approach S20 and sharing my thoughts after testing it out. I’ve tried and tested so many devices like this by now, so that being said, how did the S20 perform?

The Garmin Approach S20 is definitely better than some of the GPS watches we’ve tested in the past. Any of the cheaper models aren’t worth it in my opinion and I’d recommend saving up if you can’t afford the S20 yet. I personally prefer the handheld GPS models instead of watches, but for those who like watches, the S20 is probably the best entry-level unit available.

That being said, the S20 has been replaced by the Garmin S10. It’s pretty similar to the S20 but it does have fewer features. If you’d like to see our favorite golf GPS units, you can see the full list here.

My First Impressions Of The S20

The S20 is one of Garmin’s entry-level GPS units. Some of their devices I’ve really liked and some of them weren’t the best in my opinion. They do have the Garmin S10 watch but I did like the S20 more. It’s not that much more expensive and it has a few more features.

It seemed to be really well built and it was fairly comfortable to wear (even though I don’t really like watches). It definitely wasn’t the most comfortable watch but compared to others in this price range, it was better.

It’s not a touchscreen so you have to navigate using buttons, which is probably better in my opinion because a lot of touch watches don’t always work the best. It has over 40,000 courses loaded on it and all the main courses in my area were on it. Here’s a demo video of the S20:

It’s pretty cool that the watch tracks your distances so you can go back after the round and look at your stats and where you need improvement. This is really helpful because you’ll actually know your club’s stats so you can stop guessing and pick the right club for the job.

It’ll also keep track of fairways hit, greens in regulation, and putts per round (which can be pretty useful). Again, this will give you info that you can use to work on your game.

If you’re into tracking your fitness, it can also help with that since it has a distance and calorie tracker. I don’t really care about that stuff but a lot of people do.

Most importantly, it’ll give you the distance to the front, center, and back of the green. It’ll also tell you how far away hazards are (saved my ass countless times), and the distance to different layup spots.

One of the things I like about the S20 compared to other models is that it charges quickly and the charge will last for easily 2 rounds. Some watches do last 3 rounds but I’m fine with it as long as it lasts an entire round.

Some of the other ones only lasted about 8 hours so it was hard to squeeze 2 full rounds out of them. Most people don’t play two rounds back to back anyway so it’s not a huge deal.

It’ll also allow you to keep track of your scores right on the watch itself which is pretty cool.

One of the coolest features is the Autoshot feature which tracks your shots and displays it on the app so you can review your round to see what areas are good and what needs to be improved.

Is It Easy To Use?

To get started, all you have to do is press the “OK” button on the top right and then select “START ROUND”. It’ll take somewhere around 30 seconds to locate where you are and what course you’re on.

Once it’s connected with the course it’ll show what hole you’re on, the par of that hole, and the distance to the green.

You can also look at the distance to layup spots and hazards on the hole which is super useful.

It wasn’t the easiest to use at first, but once you play around with it for a bit, it seems pretty normal.

How Did It Actually Perform?

Some of the watches we’ve tested didn’t give much info while others were just plain not accurate. The key is to find a watch that does all the basics really well. That being said, how did the S20 compare?

It wasn’t quite as accurate as my laser rangefinder (none of them really are) but it was pretty damn close, so I was completely fine with that. Sometimes it was exactly the same as the course markers but sometimes it was about 5 yards off. That’s close enough for me and it should be for you.

It was pretty cool that it gave the distance to the hazard itself and then another distance to clear it. Some of them didn’t do this so I was pretty happy to see that.

A. I prefer the X40 because it’s thinner and a bit more comfortable.

A. Connect the watch to the Garmin app on your computer and it’ll update.

Is It Worth It?

I’d say the S20 is definitely better than some of the GPS watches we’ve tested before. It’s a great entry-level golf watch, and even though it doesn’t have all the features in the world, it’s not going to break the bank.

It has been replaced by the Garmin S10, so if you like this watch, you’ll have to get that instead. Both of them aren’t on our favorites list though, and if you want to see that, you can read that here. 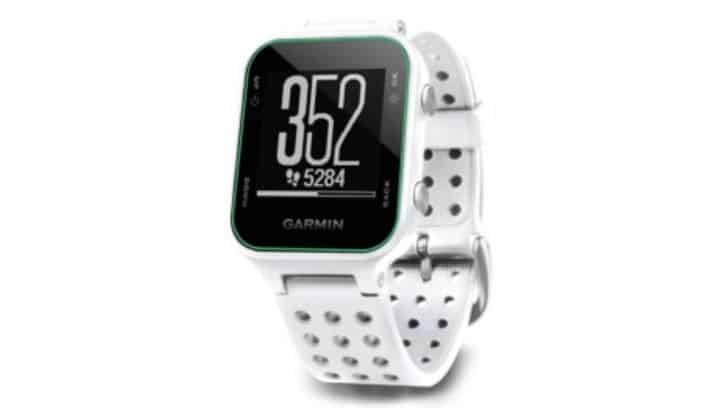 Just an average golfer trying to take my game to the next level. Was shooting around 100 not that long ago but have been able to break 90 consistently. Best round to date was 12 over. Best 9 holes were 4 over.

If you're someone who struggles with distance control or constantly find yourself in a hazard, you'll want to get yourself a GPS. In this post, I'm going to be reviewing the Garmin Approach S40 golf...

If you're someone who likes to know every single little detail when you're on the course you'll probably want to get a premium golf GPS. In this post, I'm going to be reviewing the Garmin Approach...