That being said, I’ve decided to go out and try to find the best possible golf ball for the average golfer. The Srixon Soft Feel and Taylormade Project (a) are two of the more popular balls for the average hacker and this post will talk about how they compared to each other in terms of distance, forgiveness, and feel.

I wanted to test them out in a real-world environment and that’s why I actually brought them to the course. I played a par 3, par 4, and par 5 with the two balls and you can watch the full video below. You can also check out the summary if you’d rather do that.

Project (a) vs Soft Feel: Feel

When it comes to golf balls, how it feels is more of personal preference. It’s not something that’ll impact performance but you definitely want something that feels solid when you hit it. Certain balls almost feel like you’re hitting a rock while others feel more like a sponge.

Most people prefer a golf ball that’s somewhere in the middle.

When I’m looking for a golf ball, one of the first things I look at is how firm or soft it is. I prefer something that’s more on the softer side and I think the average golfer would as well. They just feel a lot more solid off the tee and on the green. 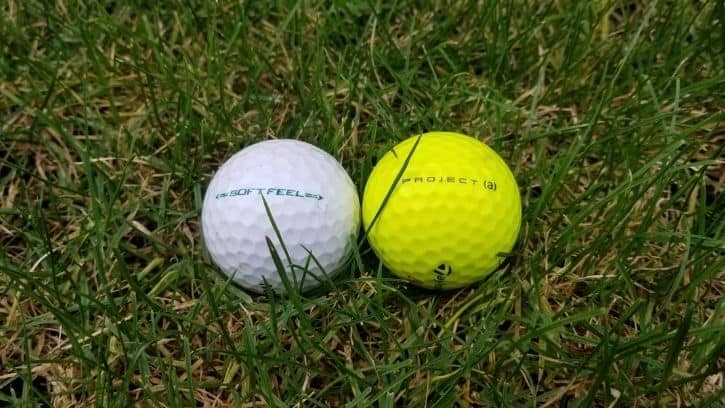 Both balls feel really solid off the tee but I’d have to give the edge to the Srixon on the green. I didn’t make more putts with the Srixon or anything like that but it definitely felt buttery smooth coming off the face.

Project (a) vs Soft Feel: Distance

This is arguably the most important aspect of a golf ball if you asked an average player. Everyone wants to bomb it long and straight down the fairway, and if that’s the case, you need to be using the right ball.

If you don’t swing as fast as the pros and you don’t compress the ball as much, you probably shouldn’t use the same ball. What’ll most likely happen is that you’ll get laughable distance, the ball might only fly 10 feet off the ground, and you’ll have a tough time hitting the right fairway.

If you watched the video above you’d know that on the first hole I thought I hit the Project (a) more solidly than the Srixon. When I got down to the ball I was pretty surprised to see the Soft Feel about 20 yards ahead of the Project. The Srixon did kick pretty hard when it hit the ground but I still think it’d be longer if it hadn’t.

The same thing happened with the second shot. The Srixon clearly went 5-10 yards longer than the Project. On the second hole, the Project ended up hitting a tree so it was a bit tough to tell which had more distance (I feel like it would be similar).

The same sort of thing happened on the third tee shot but my second and third shots were pretty close in terms of distance. The thing I can say for sure is that the Project was never longer when I struck both of them pure.

Project (a) vs Soft Feel: Accuracy

When it comes to accuracy, what I’m talking about is how often the ball ended up in the fairway. This is a lot more important to me than distance because it’s pretty hard shooting good scores when you’re always hitting out of the rough.

What I’ve always thought is that as long as you can hit the fairway and hit 200 yards, you can put up some pretty good scores. The best 9 holes I’ve ever played was when I benched my big sticks and hit 7 wood off every tee. The first 9 holes were really rough but I ended up shooting 4 over on the back 9 because I was always in the fairway. 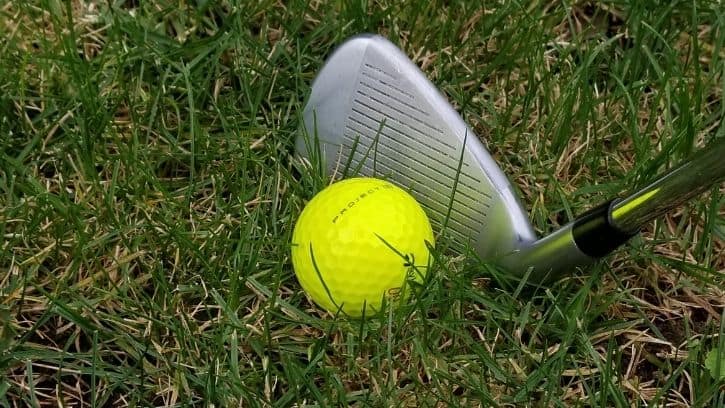 On the first hole of the video, I hit the fairway with both balls but both of them ran into the rough. The second shot into the green showed me that the Srixon had more curve to it than the project.

On the third hole, the Srixon drew way too much left (but ended up in a good spot) while the Project flew perfectly. Again, on the next shot, the Project went dead straight while the Srixon had a decent amount of left to right ball flight.

Picking a ball that’ll give you a good ball flight is another important thing to look at. If you have a slower swing speed and you use a lower flying golf ball, you most likely won’t get any sort of respectable distance.

For the average golfer, if you want to get more distance then you’ll probably need to add some height. If the ball stays in the air longer then it should give you more distance, which is what most people want.

The winner in this category was pretty clear.

On pretty much all shots, it was easy to see that the Srixon launched a lot higher than the Project. I think this was the main reason why I got a bit more distance from the Soft Feel. If you’re an average player the same should be the case for you.

If you’re an average golfer then this probably doesn’t matter a whole lot to you but I thought I’d add it in for someone who’s curious about it. I’m not able to get much spin on the ball to have it stop on the green and I’m sure most people are in the same boat.

Better players want a good amount of stopping power on the green to make sure the ball doesn’t roll out too much. Both of these balls weren’t the best when it comes to how quickly they stopped and it’s what I expected going in.

That being said, the Project did stop quicker than the Srixon. You’ll be able to see it in the video but the Srixon ended up running out twice as far as the Project. Again, this shouldn’t really matter to you though because the average player can’t get any spin on the ball.

Project (a) vs Soft Feel: On The Green

When it comes to putting, I’m a big fan of a softer golf ball because I like the way it feels off the face. Both these balls felt really good and they did perform very similar. I felt like my distance control was pretty consistent and the feel was nice and solid.

The one difference I did notice was the Srixon being a bit softer than the Project. I did like the feel a bit more but it’s not something that impacted the performance.

What Ball For An Average Player?

Taking into account everything we talked about I think the best ball for the average golfer is the Srixon Soft Feel. It’s going to be cheaper than the Project and I think it’ll perform a lot better overall. The cheapest place I could find them was on Amazon and you can check the current price here

The higher launch should give you more distance and is your best bet for shooting lower scores. If you’re an average higher handicap player then the Project (a) will fly too low and I think you’d have a hard time hitting it consistently.

I’m a mid handicap myself and that’s why I like and might consider playing the Project. If you tend to make solid contact more often than not and you want a bit of spin on the greens then you might want to consider the Project. Check the price on Amazon

For everyone else, stick with the Soft Feel. I’d still feel comfortable playing it myself.

Looking to get some new golf gear? Click here

to check out our recommended gear page to see the stuff we’re recommending and the cheapest place to get them.

I'm just an average golfer trying to take my game to the next level. Was shooting somewhere around 100 not that long ago but have been able to break 90 consistently. Best round to date was 12 over. Best 9 holes were 4 over.

If you're someone who normally shoots in the 80s you're considered a mid handicap golfer. There are a number of things a mid handicap player should be looking for in a golf ball, and in this post,...

Did you know that playing the right golf ball for your game can have a big impact on how you score? Most people don't and it's crazy because it's such a simple way to improve your game. In this post,...